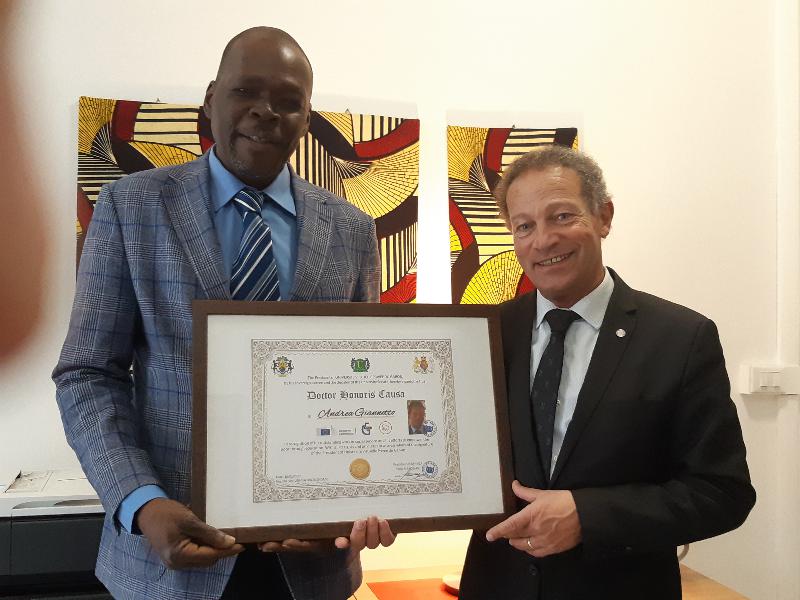 Libreville (Gabon), 18 February 2022 – The Virtual University of Gabon is honored to award the first honorary doctorate to Dr. Andrea Giannetto, President of IDA (Initiative for the Development of Africa) for the award and the remarkable work done in favor of children, disadvantaged women and young people.

IDA is part of the NGO Transparency Register of European Union.

IDA is an organization with Special Consultative Status to the UNITED NATIONS Economic and Social Council (ECOSOC).

IDA has set itself the goal of contributing to Food for the World and Dignity for All, protecting children, women and young people, providing emergency aid and encouraging education, health basics and social integration for the most disadvantaged.

Dr. Claude Keh, in the name of the Virtual University of Gabon, awards Dr. Andrea Giannetto during a formal celebration in Libreville.

A doctorate honoris causa (from the Latin causa, which expresses the goal, preceded by the genitive of honor, honoris, honor: “for honor”, honorary) is an honorary title awarded by a university or faculty to an eminent personality. A doctor honoris causa, sometimes abbreviated as Dr h. c., is the recipient of an honorary doctorate. The awarding of this honorary distinction allows the Private Virtual University of Gabon to publicly recognize the exceptional merit, the successes and the excellence of the social, cultural, scientific, artistic or humanitarian work of certain people who have made the good of Africa, and thus contribute to spreading its fame. From the year 2021, the Virtual Private University of Gabon, like all major universities, will award honorary doctorates each year. The recipients did not necessarily have a university education, but they participated in the development of the African Continent. This honorary distinction is the highest that is granted by a university to recognize the competence and excellence of national or international personalities in the main fields of human activity, which have been made available to Africa.